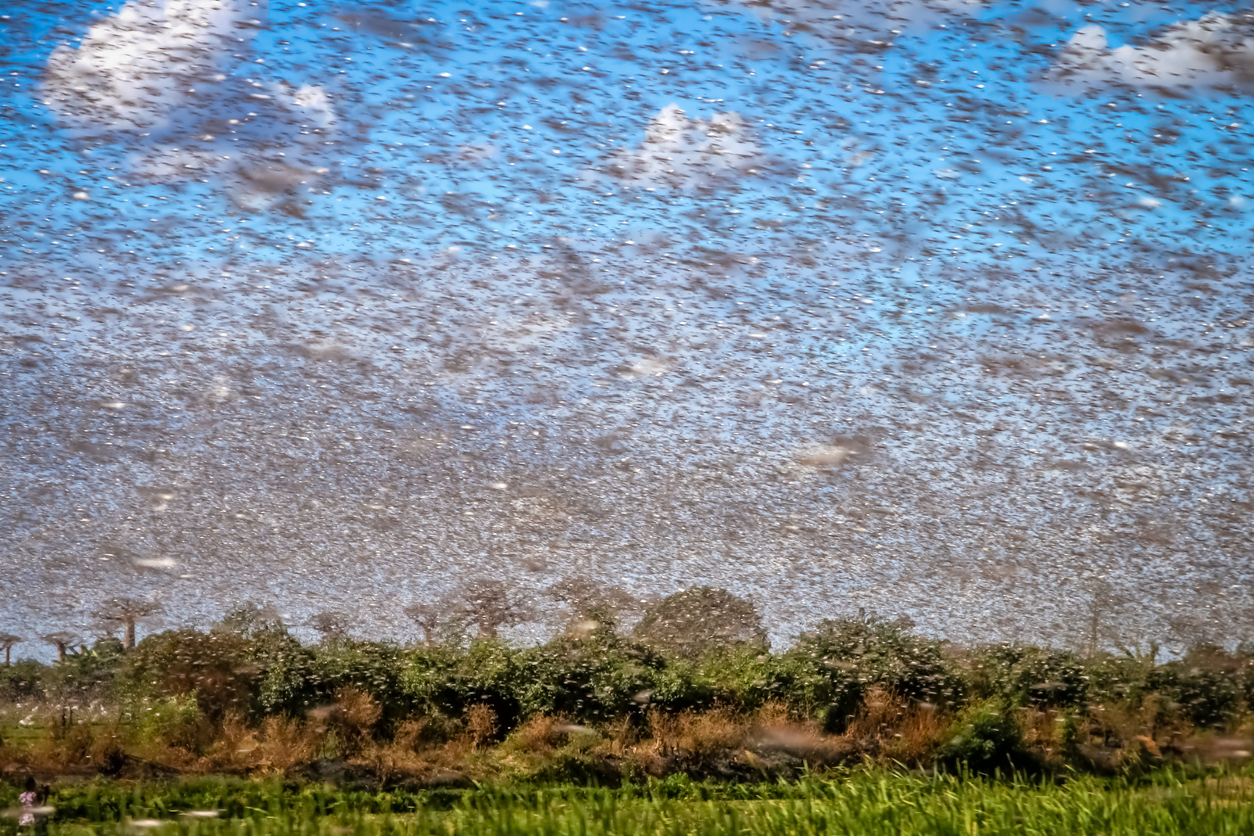 There were few bright spots during the Great Depression, but in some parts of the Midwest, the sun barely shone at all. Why? Dust clouds swirled the plains for years, shrinking visibility to three feet in any direction. And if that doesn’t sound terrible enough, there were also plagues of bugs.

These days grasshoppers are a source of fascination and wonder, but in the 1930s they spawned an epic plague that swept across America’s farmland. Let’s take a look back at the hungry, hungry hoppers that invaded the plains and deepened the Great Depression. 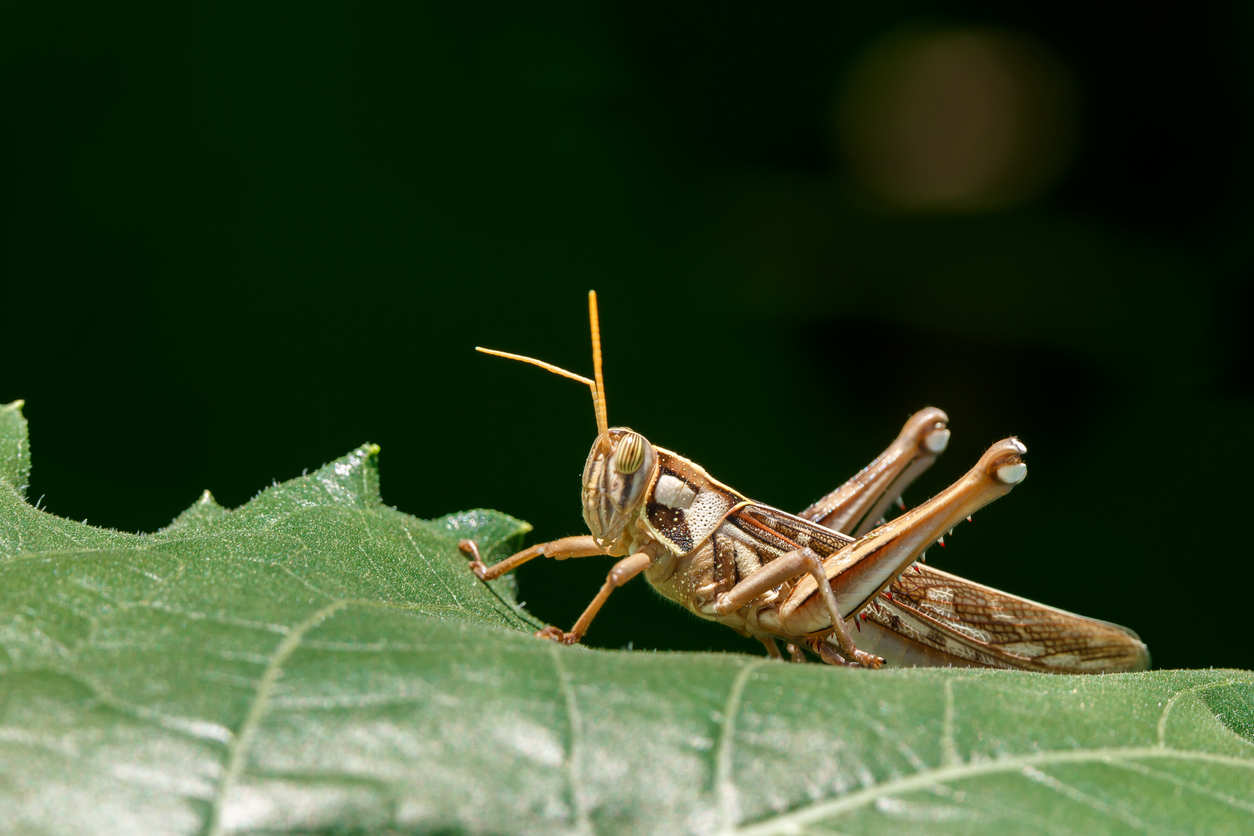 From Texas to Canada, Black Blizzards took the country by storm. The dirt landed in people’s eyes and caked their hair. The sky was so dark that towns illuminated their streetlamps during the day.

Then came Black Sunday. On April 14, 1935, more than 20 Dust-Bowl-born blizzards spread across the plains, darkening much of the country and reaching as far as New York City and Washington, D.C.

What brought on this misfortune? The country was expanding rapidly, and farmers brought their East Coast farming practices to the American heartland. But the wet, fertile weather of the 1920s gave way to an epic drought that caught farmers by surprise.

For more than 10 years, they had deep-plowed the virgin topsoil of the Great Plains. So when the drought hit, there was nothing to anchor the land — no native grasses for the soil to cling to. The winds picked up the dry, unanchored topsoil and the rest was history. With over 100 million acres ravaged by drought and erosion, Dust Bowl losses reached $25 million a day — $450 million in today’s money.

As you might expect, all that drought and dust destroyed trees, corn and other cash crops. But another plague finished the job — famished locusts attracted to dry air and available food.

These buggers traveled from farm to farm by the millions. Their silver wings were often the only way farmers could distinguish them from the dust clouds that came before.

Though they are rare today, these High Plains locusts destroyed any crops spared by the dust storms. No region was immune, but Southern states got the grasshoppers the worst. Evidence of their presence was hard to ignore. They left behind crudely gnarled cornstalks, chewed to the ground.

For those living in the midst of the invasion, the horror was real. One professor who survived a more recent invasion describes the surreal experience: “They explode from beneath your feet. There’s sort of a rolling wave that forms out in front of you. They hit up against your body and cling against your clothes. It’s almost like being immersed in a gigantic living being.”

With a population measuring in the millions, if not billions, eyewitnesses reported scooping locusts up by the shovelful. They ate entire fields of corn and alfalfa in just hours, and even descended on humans — literally eating the shirts off farmer’s backs. They even feasted on farm implements and household items like wooden hoe handles and tongues for horse-drawn carriages.

If they weren’t careful, the hopping beasts would even knock farmers upside the head. Roads were slick with dead locusts and some stories claimed trains couldn’t climb hills because of all the dead grasshoppers “greasing” the tracks. 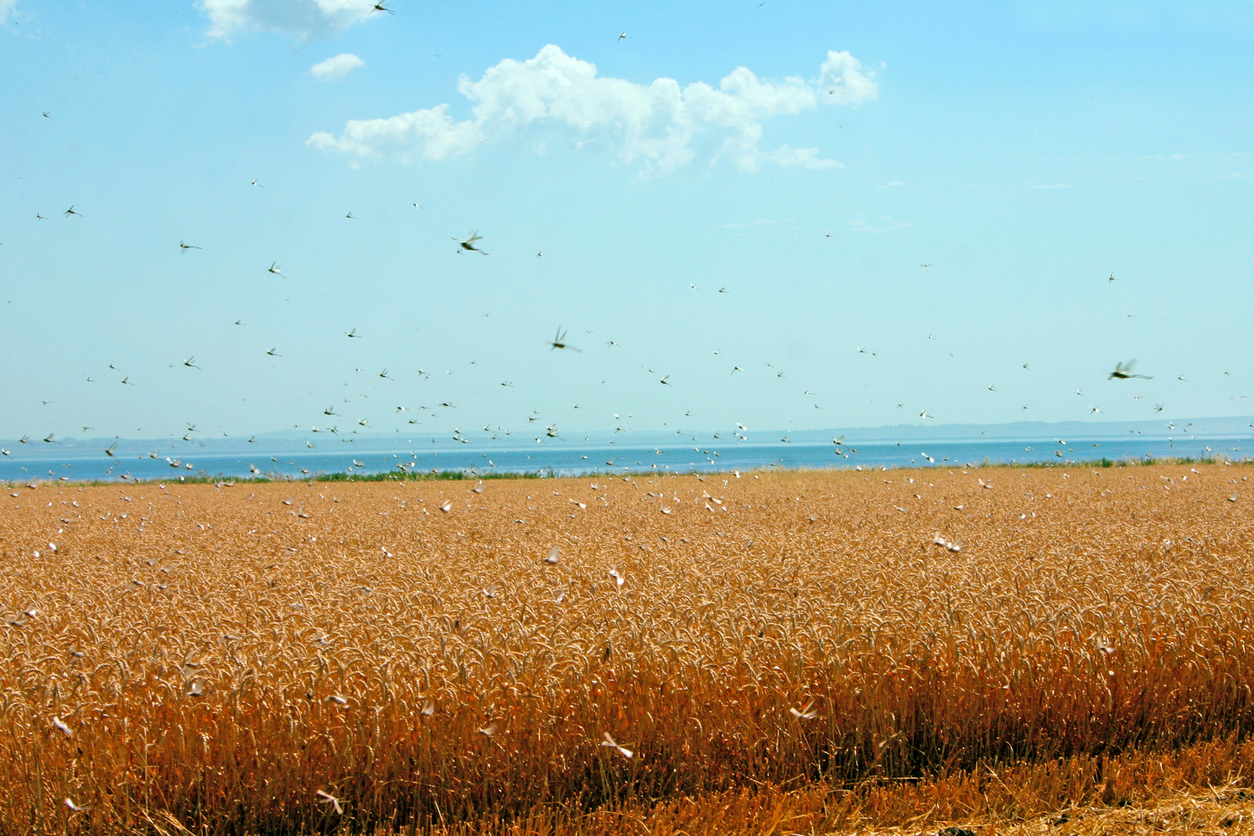 While we all know (and probably love) grasshoppers, the word “locust” has a much scarier connotation. After all, locusts were one of the Bible’s 10 terrifying plagues: “They will cover the face of the ground so that it cannot be seen. They will devour what little you have left after the hail, including every tree that is growing in your fields.”

While that description isn’t far off from the realities of the Dust Bowl, it’s important to know that locusts are, in fact, grasshoppers. The main difference is that locusts develop swarming behaviors under prime environmental conditions like dense, post-drought vegetation growth. Why? During wet weather, locust egg pods are vulnerable to fungus.

Grasshoppers live their lives in a solitary state that rarely ravages crops, but some species can develop the swarming behaviors common in locusts. In fact, migratory habits are the sole way to distinguish locusts from grasshoppers.

Under ideal conditions, grasshoppers can abandon their solitary condition and reproduce at high rates, traveling in bands of nymphs and swarms of adults.

This rapid behavior change is fueled by the happiness hormone serotonin. Once a swarm, these buggers hit up any patch of green in sight, hopping miles and miles and leaving a trail of destruction.

Grasshoppers tend to be larger, greener and more sedentary, while locusts tend to be smaller, darker and more migratory, with more distinct markings. Their wings and jaws even expand, allowing them to eat more and fly farther. 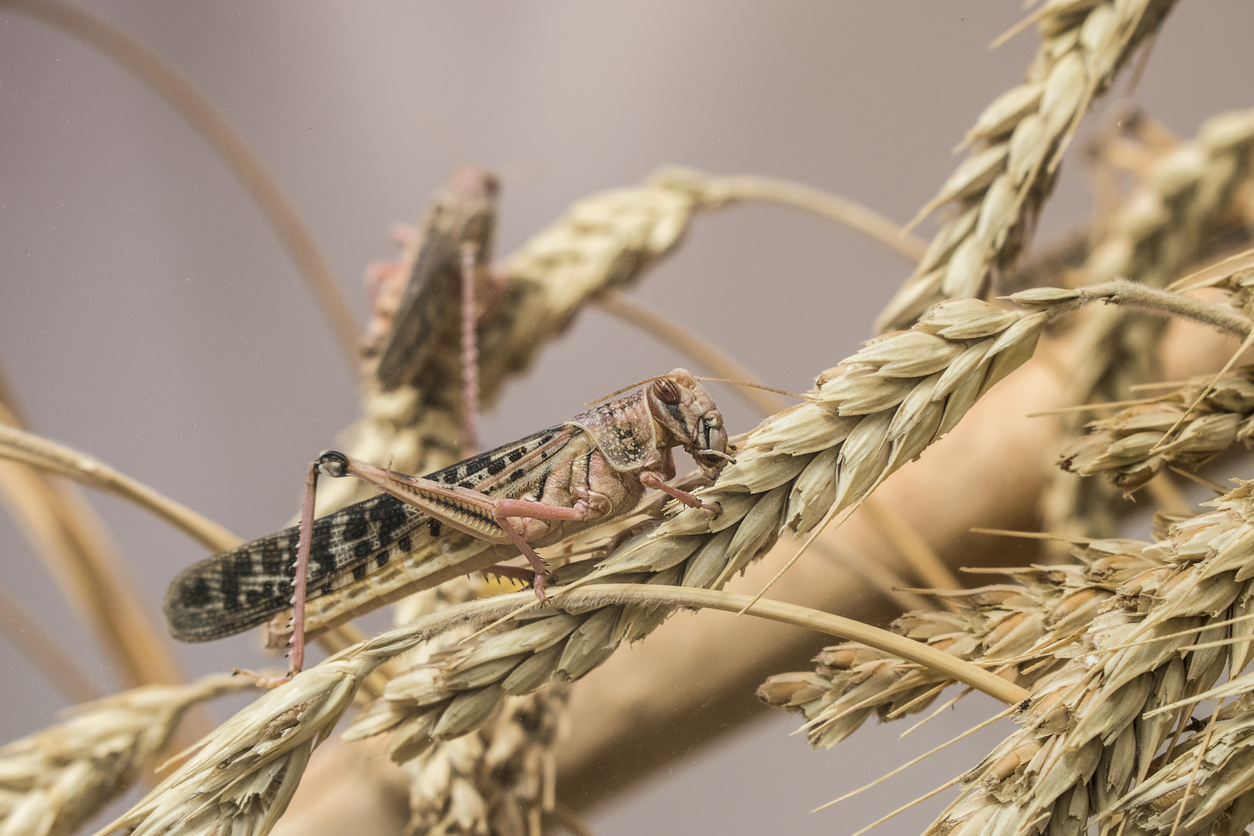 Aftermath of an Invasion

Ever since biblical times, locusts have ravaged crops, farms and livelihoods, but scientists have developed pesticides and biological controls that can help manage these voracious buggers and keep them from creating another Dust Bowl.

Thanks to improved insecticides, surveillance and agricultural practices, dust bowl-events and locust swarming behavior have decreased dramatically since the 1930s.

Still, the era left a lasting impact on farming and American culture. John Steinbeck’s Pulitzer Prize-winning novel, “The Grapes of Wrath,” was inspired by the economic and environmental hardships of Midwest farming life during the Great Depression.

Thanks to the dust storms and the locusts that followed, more than 3.5 million people moved out of the Plains states. Today one-eighth of California residents have Oklahoma heritage. Fortunately, the Great Plains have recovered. But, thankfully, the locusts have not.

If you have a locust or grasshopper invasion at your house, Arrow is here to help! Call the experts and we’ll send those pesky pests packing.