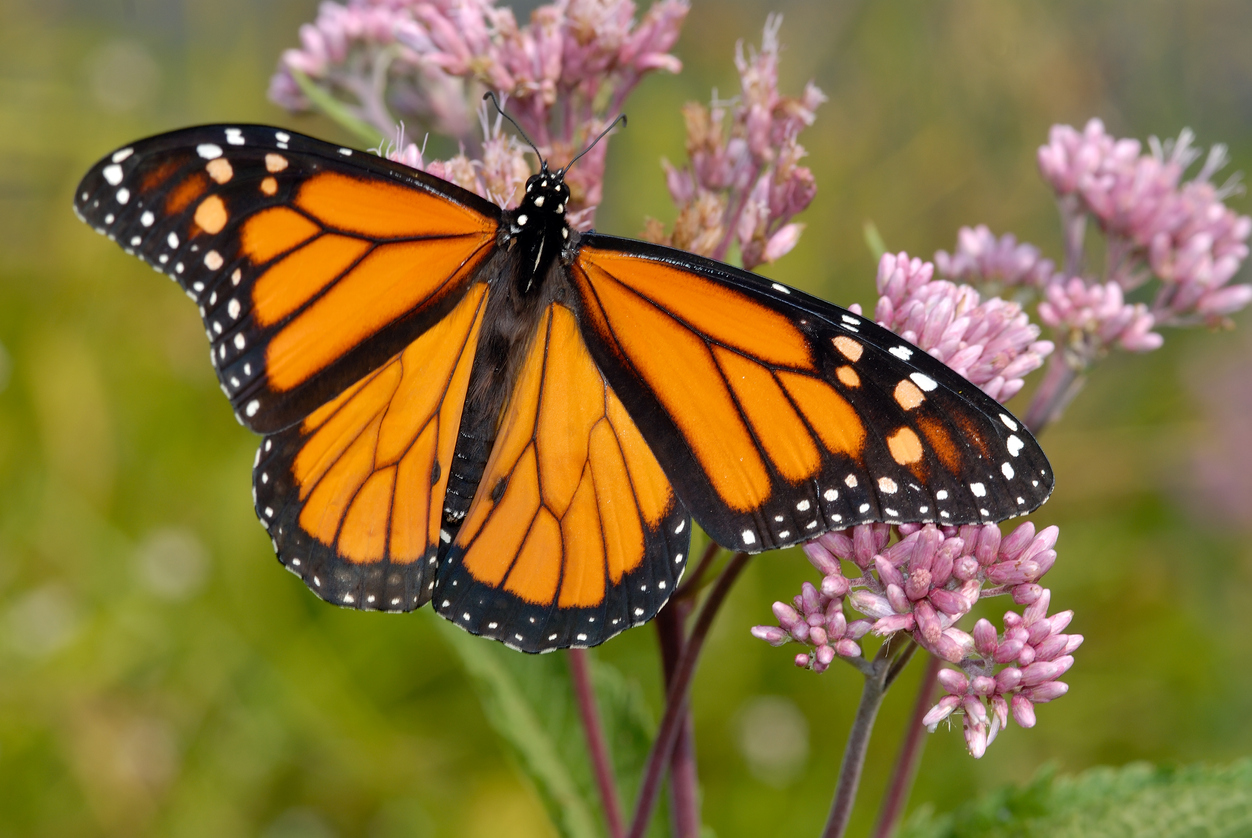 It’s a magical sight. Millions of monarch butterflies circling the skies of Mexico like bright orange kites. They take to the trees by the thousands, until every limb and leaf flutters with a vibrant orange glow.

These butterflies have made a stunning, seemingly impossible, journey from their summer haunts in Canada to their winter nesting grounds in the Sierra Madre Mountains of Mexico.

This amazing migration has taken place for hundreds of years, but it wasn’t until 1975 that scientists proved the butterflies traveled such great distances. 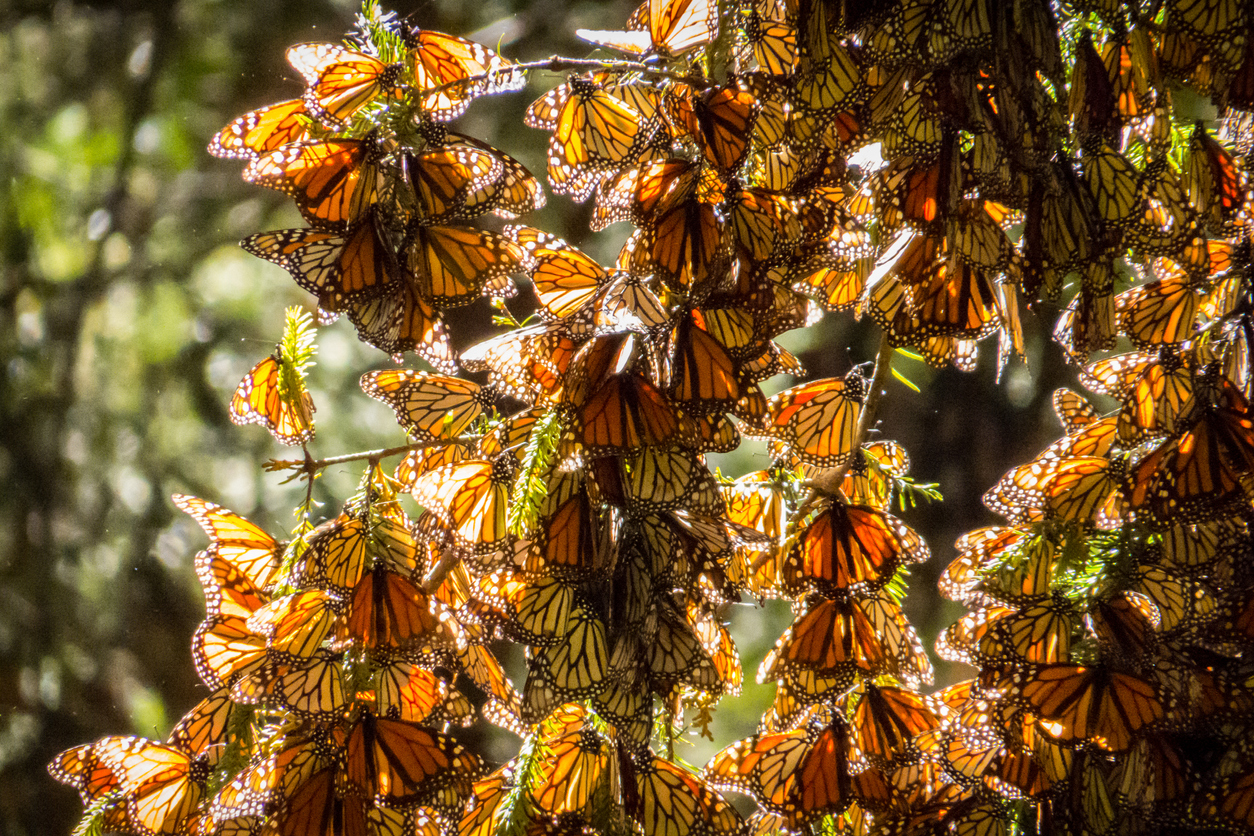 How to Spot Them
Given their orange color, these butterflies got their name from England’s King William III — aka William of Orange.Andas their moniker suggests, they truly are the king of all butterflies.

With vibrant orange wings accented by black piping and white spots, it’s not hard to spot a monarch in your backyard. Their vibrant color, while appealing to the human eye, lets predators know they are poisonous.

While monarchs feed on flower nectar in adulthood, their caterpillars eat milkweed — a natural toxin that makes them taste terrible to predators.

The Monarch Lifecycle
In February and March, monarchs come out of hibernation and start looking for a mate. Then they travel north, west and east to lay their eggs.

First Generation: In March and April, these ambitious caterpillars eat tons of milkweed before their metamorphosis. After hatching, the butterflies live just two to six weeks. But before they die, they’ll lay their eggs on milkweed somewhere in the U.S.

Second & Third Generations: Born in May and June and July and August, these are the butterflies that grace your garden. Both generations live approximately two to six weeks, and each one lays the groundwork for the next generation — bringing the brood closer to Canada.

The Fourth Generation: Primarily born in Canada, these butterflies are different from their parents and grandparents. Taking flight in September and October, this super generation is bigger, stronger and longer lived. 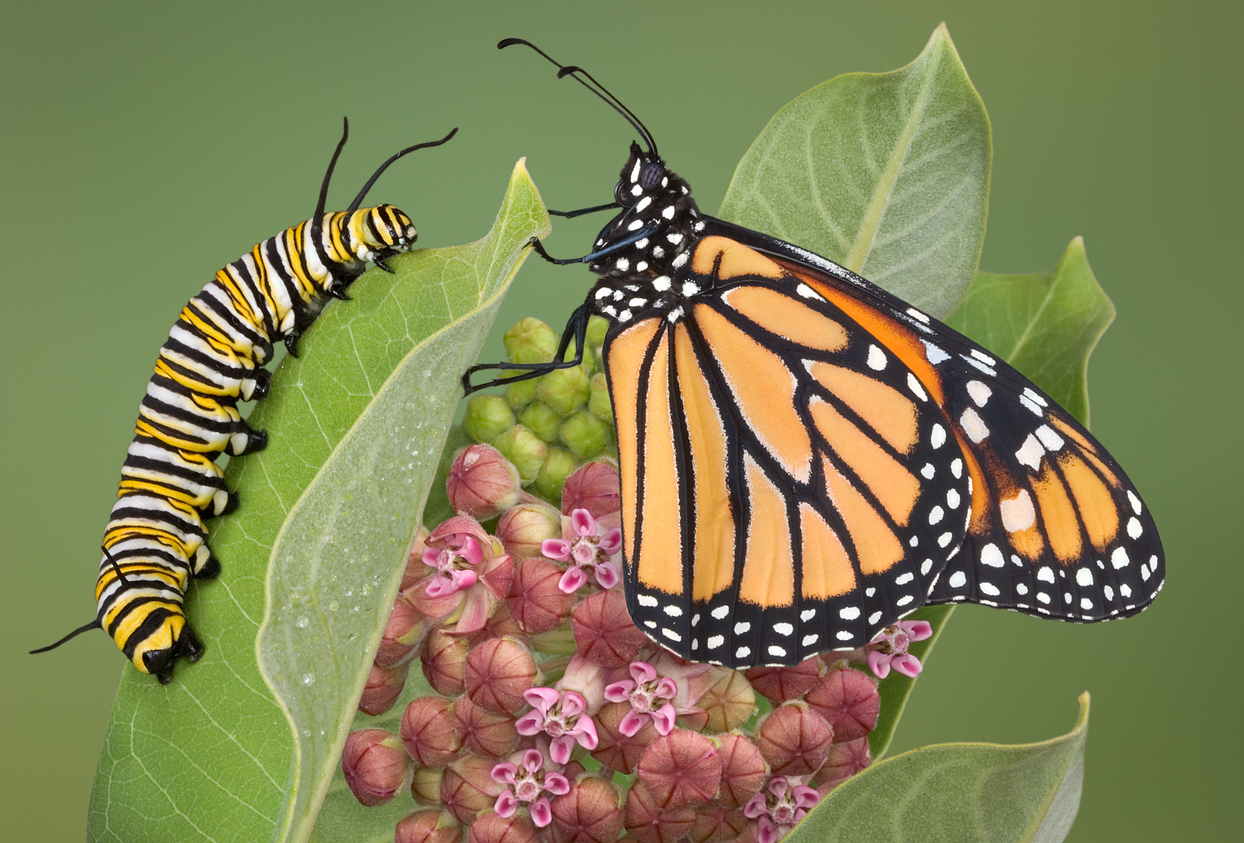 A Monumental Migration
Weighing less than an ounce, fourth generation monarchs travel for two months, migrating up to 3,000 miles from Canada to sunny Mexico and Southern California.

Arriving in late fall, around the Day of the Dead, Mexican legend contends that these butterflies are the spirits of the departed. Once they touch down, these travel-weary monarchs will live another six to eight months, clinging to the trees until spring arrives.

Monarchs in Peril
Cold and wet winters can be a challenge for monarchs. These hardy butterflies can only survive freezing temperatures if they are dry. And because monarchs nest in such concentrated areas, a sudden cold snap can be devastating to the entire population.

For years, monarch populations have declined due to habitat loss — their favorite nesting trees cleared for roads, villages and farmland. But in recent years, Mexico has realized the value of tourism, and they are reforesting and protecting the monarch’s sacred nesting grounds from illegal logging.

In 1980 the Mexican government created the Monarch Butterfly Biosphere Reserve, which protects 62 miles of forestland in the Sierra Madres. In 2000, the biosphere was expanded to 217 miles. This particular habitat is only found on 12 mountaintops in the world — a testament to these tenacious butterflies, who return to the same forests where their ancestors nested hundreds of years ago.

As recently as 1996, monarchs covered nearly 45 acres of Mexican forest, but in 2013 they only covered 1.66 acres — the lowest level in recorded history. With considerable conservation efforts, the population bounced back to 9.91 acres in 2015, but declined again to 6.12 acres in 2017.

With tourism protecting monarchs in Mexico, the biggest problem may be in the U.S., where urban development and large-scale agriculture have taken a toll on the beloved monarch’s milkweed supply.Although monarch populations have fallen 80 percent in the past two decades, there is hope for these brightly colored butterflies. 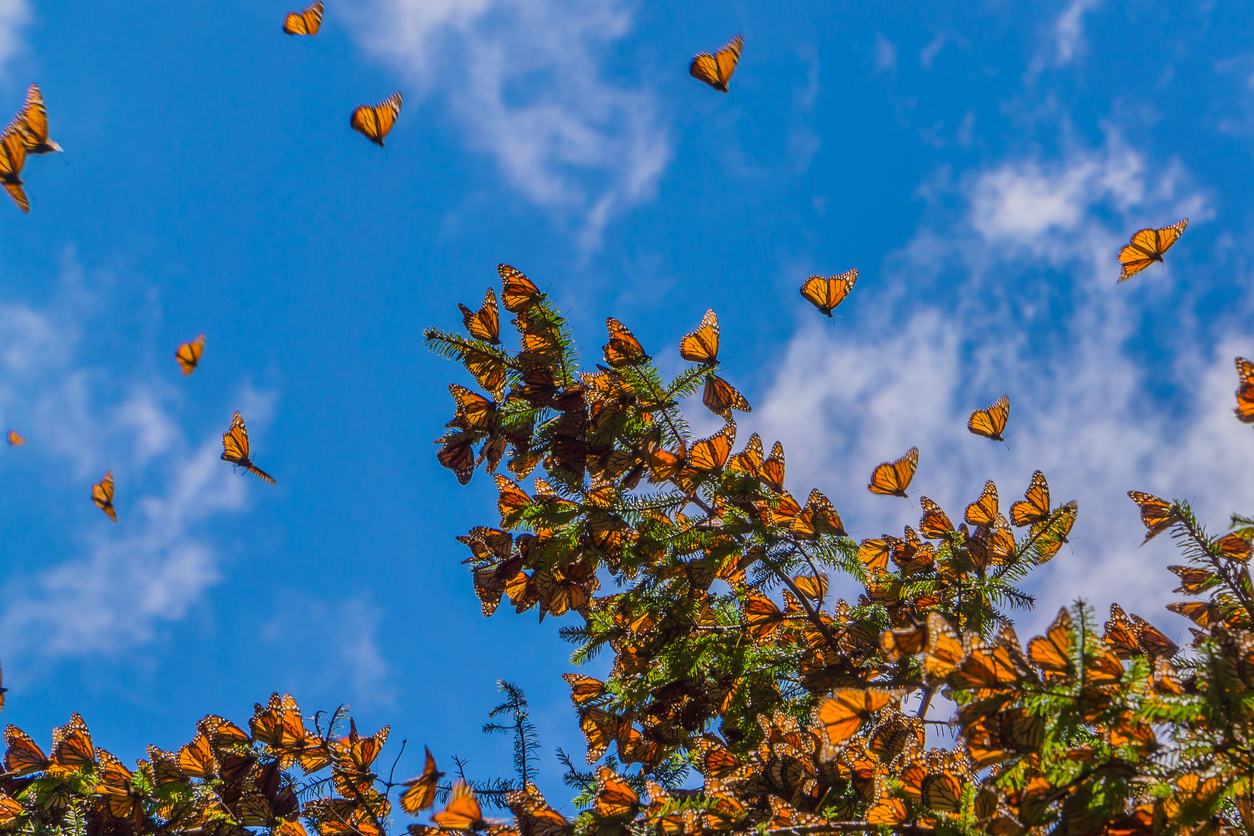 How You Can Help
Sadly, four and 10 monarchs die from lack of food. So, if you want these beauties to grace your garden for years to come, preserve their migration paths by:

-Planting native milkweed and wildflowers in your yard

-Avoiding tropical milkweed, which can be harmful for monarchs

-Delaying mowing during peak monarch activity in your area

Though this year’s monarchs are still arriving at their nesting sites, some experts believe 2018 could be a banner year for butterflies. Warm weather and sufficient milkweed led to abundant summer sightings.

The University of Minnesota’s Monarch Larva Monitoring Project saw a 57 percent increase over last year’s counts — leading some to hope that Mexico’s monarch counts could be double last year’s totals.

More migrating monarchs means more protection from extreme weather and climate events.With a little conservation and a whole lot of milkweed, we can keep these beauties flying for years to come! 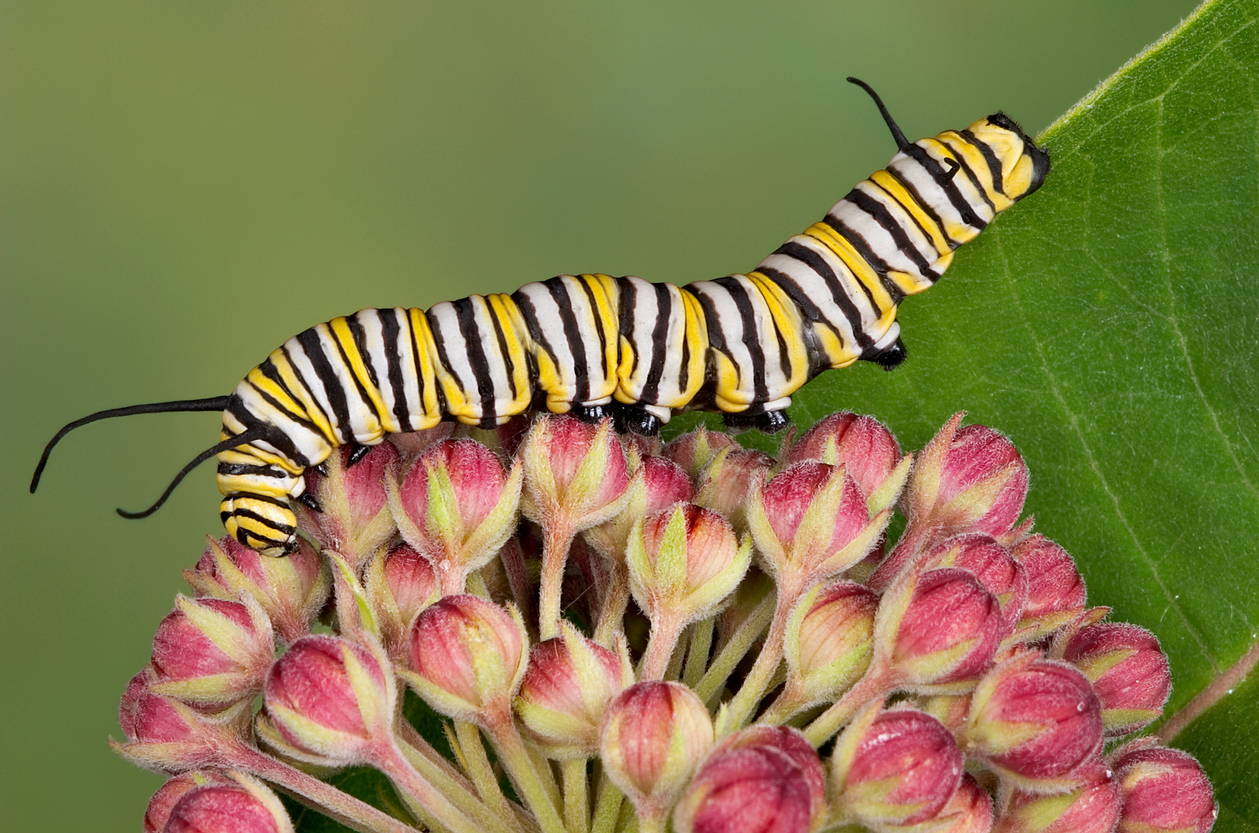 We’re Here for You
While you’re waiting for the monarchs to stop by next summer, you may encounter some less-appealing insects along the way. This season, keep creepy, crawly buggers from overwintering at your house. Give Arrow a call and we’ll help you out!