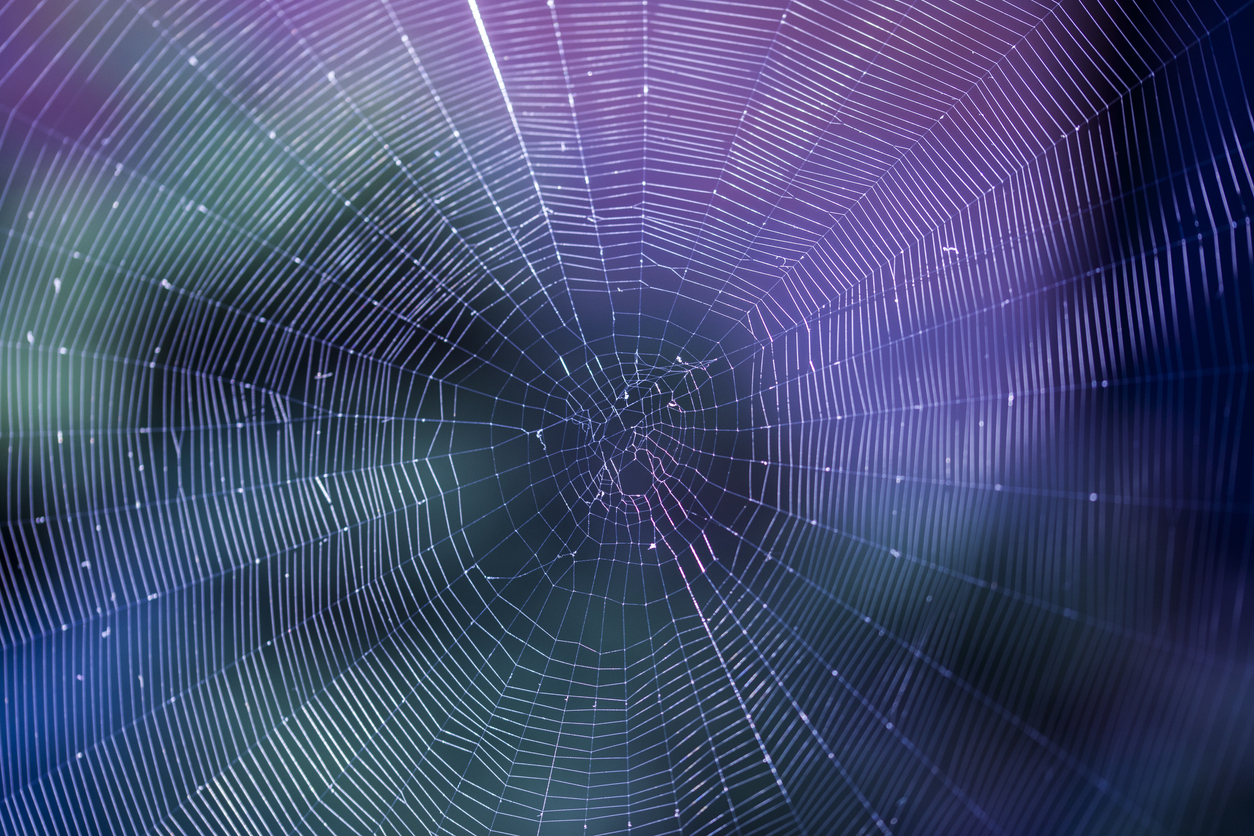 Step Inside the Spider’s Web

Spider lore is a tangled web of lies and exaggerations.

These eight-legged wonders rarely bite humans, and even fewer are actually poisonous. They are more Charlotte’s Web than Arachnophobia.

And best of all, they make their living eating buggers that are actually harmful to us — mosquitoes, ticks and biting gnats.

So let’s celebrate our sophisticated, silky friends with 10 facts about their shiny, sticky, webby wonders.

OK, they’re not quite Superman — or even Spiderman — but spider webs are almost as strong as steel and Kevlar. Yep, that stuff they use to make bulletproof vests.

Why? Spider webs pack a lot of tensile strength so they can absorb the kinetic energy of bugs in flight. And then they need real sticking power to keep large insects from escaping their webby grasp.

Not all spider silk is the stuff of steel. But all spiders produce ultra-strong dragline silk. It’s the substance that allows spiders to hang from ceilings and quickly spin away from danger.

It may be a tenth the size of a human hair, but on a weight-by-weight basis, it’s several times stronger than steel. That means Spiderman’s cinematic dragline is probably much thicker than it needs to be. 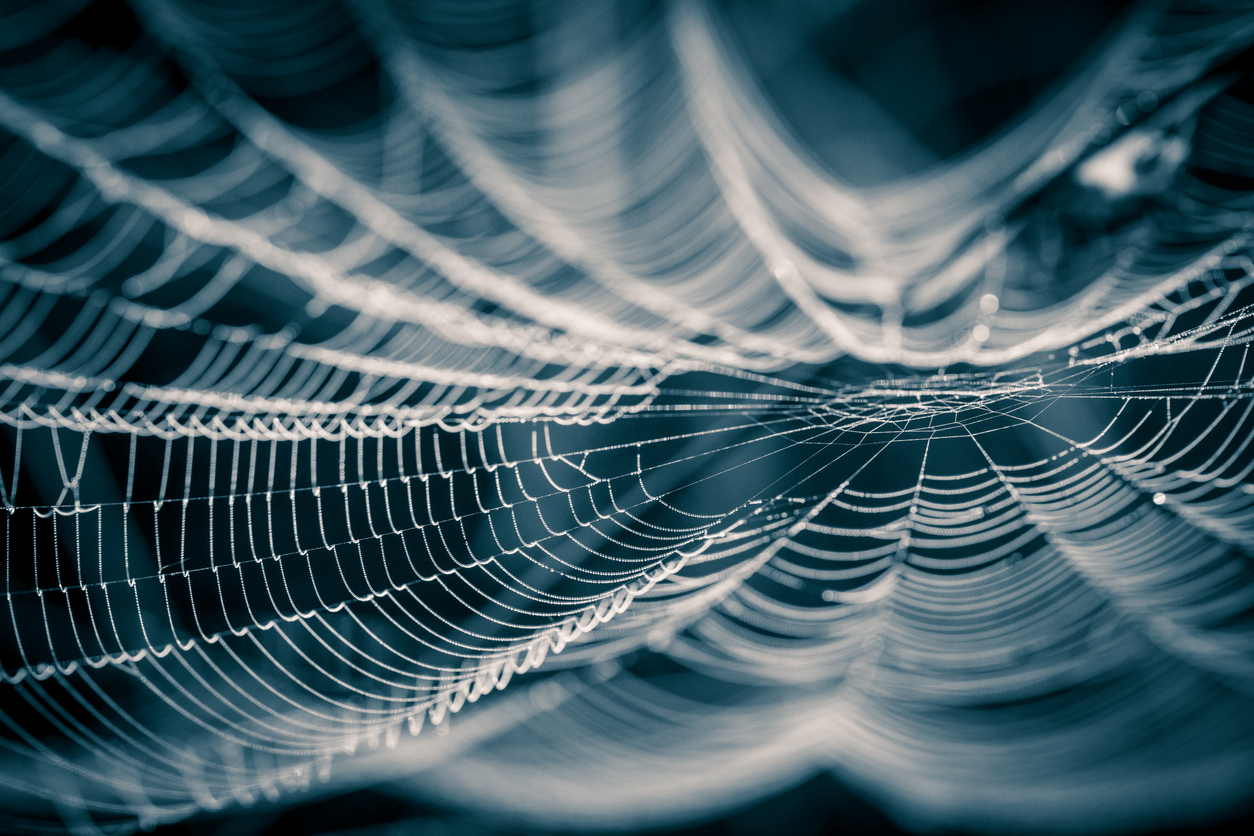 2. Artists of Many Mediums

Part engineer, part sculptor, part architect, our spidey friends have mastered their craft over millennia. Even a lowly garden spider produces up to seven types of silk.

And better yet, each silk serves a distinct purpose. Some make webs stretchy and others make them less brittle. Some keep webs moist, while others protect against harmful bacteria.

The fact that nocturnal spiders leave these intricate designs to their sun-loving brethren seems to indicate that these ornaments exist solely for the benefit of being seen.

Spider webs may be beautiful meal tickets, but catching a delicious dinner is all about keeping up with the Joneses. That’s why many spiders replace their webs every single day. And we’re not talking about renovations here and there. Spiders start over and create new webs from the ground up. 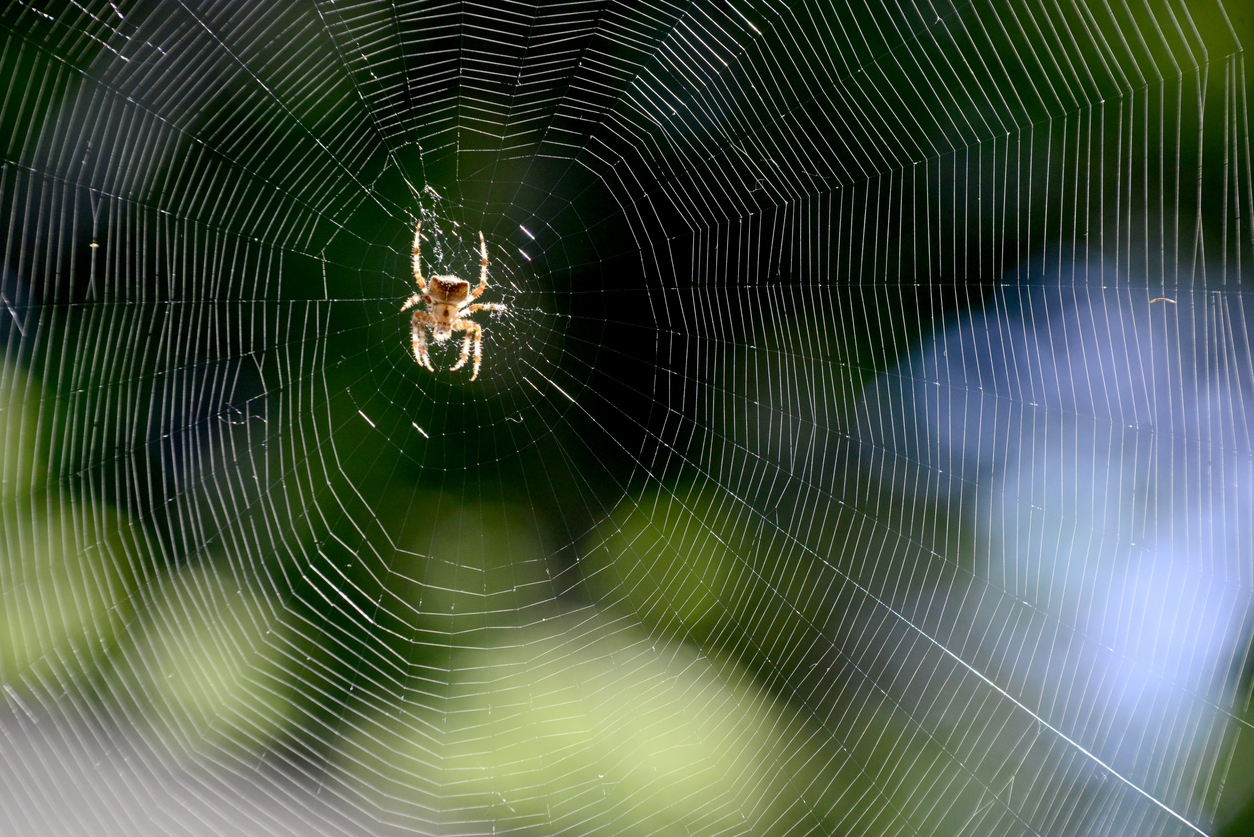 Not all parts of a spider web are sticky, but the ones that are come from a powerful polymer adhesive produced by a gland in the spider’s abdomen.

A spider deposits this sticky substance all over the outer reaches of his web, leaving the center untouched so he can move about with ease. When he travels to the edges of his kingdom to pick up prey, spidey uses special “walking claws” attached to his legs to keep from getting stuck.

6. Open to the Elements

Spiders apply sticky adhesive to their webs as they leave the body, so they lose their sticking power as the day goes on. Environmental factors like humidity and temperature play a big role in how long webs can stay stuck like super glue.

Ultraviolet light also plays a role in how long a spider web will last. Unlike nocturnal and forest-dwelling spiders, garden spiders and other sunny species have webs that still stick in direct sunlight.

These spiderwebs are shiny because the reflection of UV light attracts insects. Shiny spots resemble gaps in vegetation, which bugs mistake for superhighways in the sky. 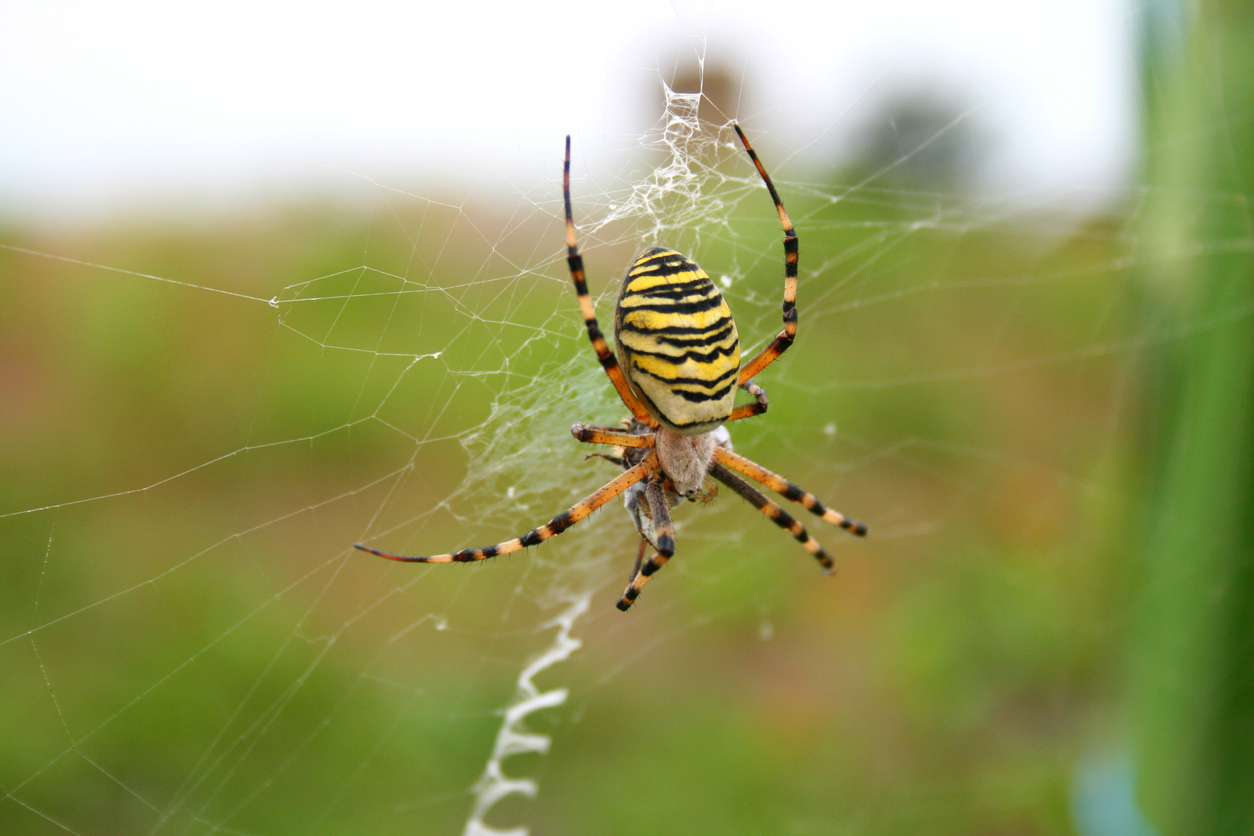 7. So Much More Than Webs

Webs are perfect for catching dinner, but spiders use their sticky talents for so many things, including wrapping their egg sacks and creating drag lines that help them find their way back to their nest after stalking prey. Spiders can even use their silk as kites, sailing hundreds of miles with millions of fellow spiders in mass “ballooning” events.

The feather-legged lace weaver has one heck of a hidden talent. Instead of spinning out a sticky web, this talented weaver spins a nano-thin silk from its cribellum. It uses special hairs on its hind legs to comb the silk as it exits the body, creating electrostatically charged threads to trap its prey. 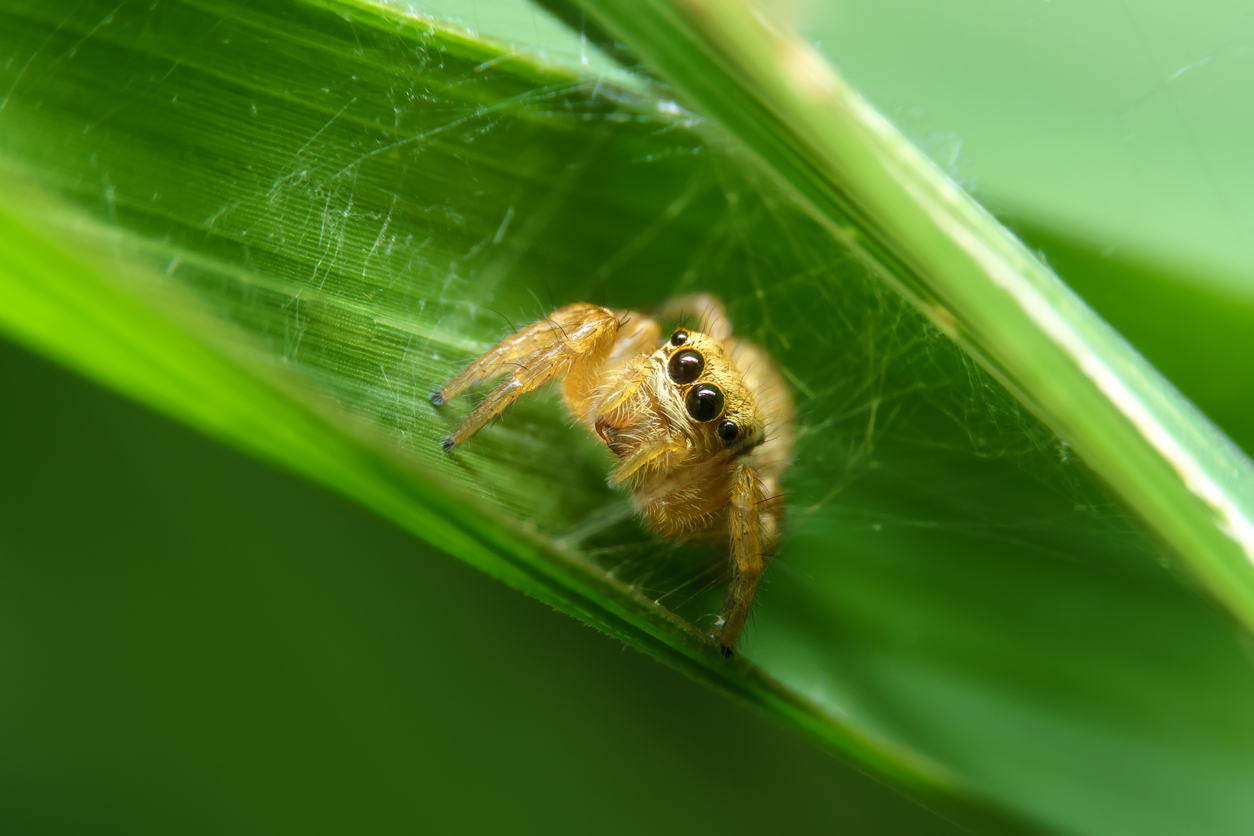 9. All Spiders Great and Small

No two spiders — or spider webs — are alike. Some webs are so small, they’re barely visible to the naked eye, while some are so large, they can span the banks of rivers and lakes.

One such weaver is the Darwin bark spider, who builds webs up to 80 feet across, forming bridges that catch large insects like dragonflies as they come up from the water’s surface.

Before any webbing begins, the female spends days shoring up her bridge lines anchored across the water. Meanwhile, the male hangs out on the sidelines, hoping to catch a snack here and there.

Possessing the strength of steel, the toughness of Kevlar and the elasticity of nylon, scientists are busy developing spider-web lookalikes such as “liquid wire,” and adhesives that mimic their glue-like protein droplets. Spider silk could be used for bandages, sutures, ligaments, fishing lines, rock-climbing ropes and more — if it wasn’t so difficult to harvest.

It took four years, more than a million spiders and 70 human workers to make a single 11x4 piece of fabric out of spider silk. Adding to the difficulties, spiders living in close quarters have a tendency to eat each other.

Perhaps that’s why scientists added the golden orb weaver’s silk-spinning gene to goat DNA — creating genetically modified spider goats that produce silk in their milk. We could be wrong, but the existence of spider goats may be the scariest spider fact of all.