This is one of the most widely distributed ticks in the world, and there are records of its occurrence on a number of hosts. By far the most common host is the domestic dog, and the brown dog tick is virtually restricted to this host in the United States. 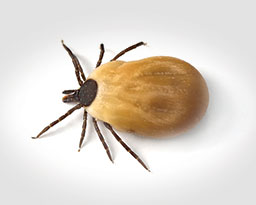 Where Are Brown Dog Ticks Found?

Brown dog ticks tend to be found in wooded and grassy areas; however, they can also be found in urban areas and on beaches in coastal areas. Adult ticks commonly attach to the ears and between the toes on dogs, and the larvae and nymphs are often found in hair along the dog’s back. When the individuals of each feeding stage become fully engorged, the ticks drop from the host and seek some protected situation in the immediate surroundings. For this reason, all tick life stages may be found behind baseboards, around window and door moldings, or in furniture.

Where Do Brown Dog Ticks Live?

Brown dog ticks live outdoors in the southern United States during any time of the year, but they are found active outdoors only during the warm months in the northern United States. The female may deposit as many as 5,000 eggs in places such as between boards, under plaster or carpeting, or in other cracks and crevices.

It usually takes 3 months to 3 years for brown dog ticks to complete their life cycles.

A home can become heavily infested if the family dog picks up ticks from an infested residence, boarding kennel, open field, or similar place where other infested dogs have been present.

Some non-product techniques that help reduce tick problems include keeping grass and weeds cut short in tick-infested areas. Sealing cracks and crevices where ticks can hide, both inside and on the exterior of the home, will aid in management. Checking the dog prior to entering the home and removing any ticks found will also help reduce the chance for ticks to infest the home. The dog must be treated if the infestation is to be eliminated, and the treatment should be performed by professionals trained in animal treatments such as veterinarians.