The most common cockroach species found in U.S. homes, apartments, restaurants and hotels, the German cockroach is a small roach species that can be found all over the world. 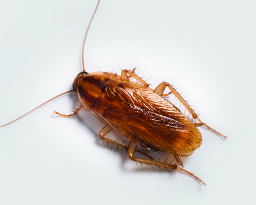 Active at night and hiding in dark crevices during the day, spotting a German cockroach during the day is a good sign that the available cracks are already full or food and moisture are in such short supply that daytime foraging is necessary. The German cockroach is a general feeder but is particularly attracted to fermented foods and beverage residues.

Where Do German Cockroaches Come From?

Where Do German Cockroaches Live?

Most commonly found indoors, infestations are sometimes found in areas not generally suspected of harboring roaches, such as dresser drawers in bedrooms. German cockroaches found scattered through non-food areas of a home or building are usually a sign of a heavy infestation or effective insecticide applications elsewhere in the facility. Adult males are the most mobile German cockroach population, while pregnant females rarely leave the harborage.

Though they prefer kitchens and bathrooms and spend 75 percent of their time in harborages, German cockroaches can pass through apartments through light switch plates and come in with grocery bags, cartons, handbags, and luggage. Nymphs, which are often black in color, can fit through holes less than 1/32 of an inch, while adult roaches can fit through holes less than an inch wide.

Light brown or tan in color, with two black stripes behind their head, at less than an inch long, these light to medium brown roaches are on the smaller side.

Females typically produce one egg capsule every three to four weeks, which contains 25 to 45 eggs. Females often carry their egg capsules with them until they are ready to hatch. Living up to a year, young nymphs reach sexual maturity at 36 days, making them an insect with “high reproductive potential.”

Though adults of both sexes have well-developed wings, these roaches rarely fly and prefer to scamper and crawl across surfaces instead.

Voracious omnivores, cockroaches are known to feed on plants and meat. Though they have been known to eat dead and living human flesh, they are most likely to chew on fingernails, eyelashes, feet, and hands. Such attacks can cause irritation, lesions, swelling and even minor infection.

Preferring exposed or discarded food to human flesh, roaches are most likely to attack humans during large infestations where food sources are limited.

With a penchant for living in bathrooms, drains and dumpsters, cockroaches spread at least 33 kinds of bacteria, six kinds of parasitic worms and at least seven other kinds of human pathogens. They can pick up germs on the spines of their legs and bodies as they crawl through decaying matter or sewage and then carry these onto food surfaces. Germs that cockroaches eat from decaying matter or sewage are protected while in their bodies and may remain infective for several weeks longer than if they had been exposed to cleaning agents, rinse water or just sunlight and air.

Recent medical studies have shown that cockroach allergens cause lots of allergic reactions in inner-city children. They were even shown to cause asthma in children. These allergens build up in deposits of droppings, secretions, cast skins and dead roaches.

Keeping your home, particularly your kitchen and bathroom, clean and free of food and soap debris is the first step in preventing an invasion.

Since roaches thrive in humid environments, using a dehumidifier in moist areas like basements can go a long way in preventing an infestation. Keep all sinks, bathtubs, and showers dry and free of standing water.

Since cockroaches can feed on even the smallest of crumbs, be sure to thoroughly clean your cabinets, pantries, and countertops. Don’t leave trash out in the open, keep your cans tightly sealed and your sinks and dishes clean. Seal up all food containers and don’t leave pet food sitting out.

Signs of a German Cockroach Infestation

Signs of a German cockroach infestation include an oily, musty odor, dark droppings that resemble pepper or coffee grounds and dark fecal stains in the corners of rooms. Dead roaches or shed skins are also telltale signs. These light brown buggers also have a love of soap and toothpaste, so look for them in your bathrooms as well as your kitchen.

How to Get Rid of German Cockroaches

After robbing them of their food, water, and shelter, a vacuum cleaner with a HEPA (High Energy Particulate Air) filtration system can be used to remove large amounts of cockroaches in a short period of time. Do not attempt to vacuum this pest without a HEPA filter on your vacuum.

Insecticide sprays can be used to create perimeters or barriers around baseboards and doors. Bait traps, insecticide granules, and dusters are all effective means of getting rid of roaches.

If you have a roach infestation of any kind, Arrow can help. For a customized treatment plan, contact our team using the form below.