Flying Squirrels usually live in wooded areas and make their nests in trees. Though they are similar to other squirrel species, they are equipped with longer limb bones to aid in gliding. 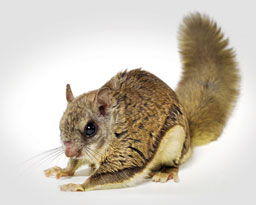 Contrary to their name, flying squirrels do not actually fly. Instead, they appear to fly by gliding from tree to tree with the help of a parachute-like flap of skin and fur that stretches from their wrists to their ankles. With the help of their long limbs and tails, flying squirrels are able to steer and exert control over their flight path, which can range up to 100 feet.

These omnivorous critters feed off of fruit, seeds, insects, flowers, spiders, fungi, bird’s eggs and tree sap. The smallest and only nocturnal squirrel, flying squirrels typically have two litters of two to seven pups per season — usually in mid-summer and early spring.

Where do Flying Squirrels Nest?

Flying Squirrels will often build nests in trees, sometimes using existing woodpecker holes in tall dead stumps or building nests in the summer out of bark and twigs. They will build nesting sites in both coniferous evergreen and broadleaf deciduous forests.

Do Flying Squirrels Live in Your Attic?

Flying squirrels are known to enter homes in late fall when temperatures begin to drop. In addition to nesting in high places like attics, flying squirrels can also be found in external walls and between floors, using insulation as nesting material.

Highly social by nature, their playful, nocturnal habits give them away. Homeowners with flying squirrel stowaways often hear them scurrying around in the attic or coming and going after midnight.

Flying Squirrels can do considerable damage to exterior trim and siding as they widen or create new entryways to your home. Once inside a home or structure, they can gnaw on electrical wiring and possibly cause a short or a fire.

While there has never been a report of a flying squirrel having rabies, they are capable of getting typhus — though it is rarely passed to humans. Flying squirrels also carry lice, fleas, mites and other parasites.

Signs of a Flying Squirrel Infestation

Evidence of flying squirrels can be found through droppings, tracks, scents or actual sightings. Inspect the roofline of your home for chew marks and small entry points.

In addition to scratching sounds in the middle of the night, you may also hear low, soft chirping or clucking sounds. These social beings live in colonies of up to 20 squirrels, so if you find one squirrel, there are probably more hiding out. If you suspect these curious and intelligent creatures are living in your home, you may have to do some nighttime snooping to detect them.

Flying Squirrels are protected game animals in many areas, but you can prevent them from entering your home by performing structural exclusion methods. Use metal flashing or metal mesh to cover any possible entry routes while a potential animal is out foraging. These squirrels are quite small, so remember to cover all cracks, holes, crevices, nooks, crannies and gaps.