Opossums are the only marsupial found in North America. They are approximately the size of a large cat, with medium-long, brown or gray fur and a long, scaly tail. Opossums can also give off a strong, musk-like odor. 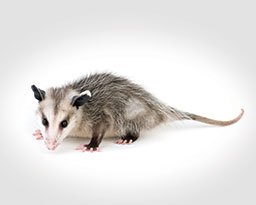 Opossums are mostly docile, aloof and rarely dangerous. When faced with a threat, opossums will often play dead by “playing possum.

Rabies is extremely rare in opossums, as their body temperature is too low for the virus to thrive. Opossums can, however, carry other diseases like tularemia, tuberculosis, spotted fever and toxoplasmosis.

Opossums are omnivores who prefer to set up camp near readily available food sources. Opossums like to eat a wide variety of foods, ranging from fruits, grasses, insects, mammals, birds, fish and even carrion. Opossums also have a knack for keeping rats and roaches at bay since they commonly compete for the same territory.

Opossums are estimated to eat 5,000 ticks every tick season, making them a powerful ally in combatting tickborne diseases like Lyme disease and Rocky Mountain spotted fever.

Opossums are not blind, despite being generally sluggish and slow-moving creatures. They actually have strongly dilated pupils that allow them to see well in the dark.

Opossums are nocturnal, typically hunting for food at night and seeking shelter in hollow logs and trees, crawl spaces beneath structures, garages, abandoned woodchuck burrows and even squirrel’s nests during the day.

While opossums are typically non-aggressive and can even be docile, they do not make good pets due to their highly specific dietary needs. It is extremely difficult to find the right balance in their diet in captivity and an unbalanced diet can result in severe metabolic disease.

Additionally, it is illegal to keep an opossum without a wildlife rehabilitation license in almost every, U.S. state.

Do Opossums Carry Their Babies?

Opossum babies, called joeys, are about the size of jelly beans when they are born. Once born, they crawl into the mother's pouch to continue developing. As the joeys grow older, the mother will carry them on her back for about 100 days until they are mature enough to strike out on their own.

By performing exclusion methods, opossums can be prevented from entering structures. Exclusion methods entail using metal flashing and metal mesh to cover any and all possible entry routes, or in some cases by reconstructing entry areas altogether. Covering garbage cans and other readily available sources of food can also curb opossum populations. If you have dealt with an infestation in the past or live in an area where opossums and other wildlife are prevalent, you may consider enlisting professional prevention services. Learn more about our complete wildlife control services.

Signs of an Opossum Infestation

Opossums are most often found when digging in trashcans and rustling around attics. Signs of their activity can also be detected in lawn damage where opossums have dug around for grubs and other bugs. If you hear a rustling in your garbage cans or notice any unusual activity, seek a professional wildlife inspection. You can contact us for a free home inspection anytime using the form below.