These social insects are found all over the world. An extremely important and beneficial insect, honey bees pollinate more than 100 crops in the U.S. 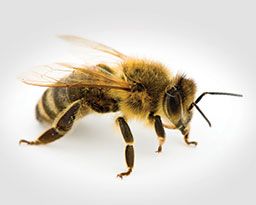 Originating from Africa and spreading to Northern Europe, the Western honey bee has been managed by humans for centuries and prized for its honey and beeswax. Though not native to the Americas, Western honey bees were brought over by explorers and colonists, eventually spreading from coast to coast.

Where Do Honey Bees Live?

Depending on the species, honey bees build their nests in shrubs, crevices, attics, chimneys, trees, and even cliffs. Honey bees produce honey from the nectar of the plants they pollinate, storing this precious resource in honeycombs inside their nests.

Honey bee pollination services have been valued in the billions of dollars, with each hive creating 66 pounds of honey a year.

Since 2007, honey bees have experienced unnaturally high death rates, with 30 to 70 percent of European hives in North America disappearing. Dubbed colony collapse disorder (CCD), these mysterious die-offs have been linked to a combination of factors, including neonicotinoid pesticides, the expansion of Africanized honey bees, and even viruses.

Honey bees do sting, but they can only sting once. For most people, stings are incredibly painful but not dangerous. However, people who are allergic to bee stings will often have a more severe reaction that could result in death if they do not have access to an EpiPen or they do not receive immediate medical attention.

A honey bee’s barbed stinger is located at the end of their abdomen, connected to their digestive track and venom sac. When the bee tries to fly away after stinging, vital parts of the bee’s body are pulled out with the stinger. As the bee dies, the stinger spreads its venom, and the victim’s symptoms increase. Pheromones are released after a honey bee’s sting, alerting other bees that they need to defend the colony.

Honey bees are typically docile, but they can become more aggressive if their hive is missing a queen, or if they face a shortage of nectar-producing flowers. In the event of nectar death, honey bees will engage in a process called robbing, where bees fight each other at the entrance of hives, and the ground becomes littered with dead bees.

Threatened bees release a pheromone that will make nearby bees more aggressive. The smell of dead bees can also summon dangerous aggressors like wasps and yellow jackets. And as winter draws closer, animals like raccoons, skunks, and opossums may attempt to raid hives, causing bees to become even more aggressive. Rainy or hot and humid weather can also make bees angrier than usual.

Bee stings are usually not dangerous unless a person is allergic to the venom. Signs of an allergy include nausea and fainting. If left untreated, the result could be death. The number of stings also plays a role. If stung enough times, any person could face death.

Honey bee stings can be quite painful, depending on how much venom enters the body before the stinger is removed. Painful swelling, itching, redness, and irritation around the skin often follow the initial, stinging pain.

How to Safely Get Rid of Honey Bees?

In the spring, honey bees are on the move and actively looking for new homes. If you suspect they’ve taken up residence near you, search for dead bees to make sure you’re dealing with honey bees.

Bees are important pollinators that are usually not aggressive or dangerous. To identify a honey bee, look for hairy legs and hairy, pollen-catching bodies.

You can also identify a honey bee by its nest. Unlike wasps, which build their nests out of wood and mud, bees construct honeycomb-shaped homes out of wax.

Once you’ve located their nest and you know you’re dealing with honey bees, your best bet is to call a local beekeeper who is eager to protect this beneficial but threatened species.

Removal of a honeybee nest can be very messy, so it’s best to leave the work to a professional. Honeybee colonies are so large that only a pest control professional or experienced beekeeper can safely remove a hive.

Beekeepers can remove bees and their hive without killing them, and they may do this for free, for a small fee or they could even pay you. Beekeepers will remove the honeycombs with the brood inside and place them in a hive box. If a hive is difficult to reach, the bees can be sucked out with a special vacuum. If the bees are nesting behind a wall, a contractor may be required to help remove them.

In the event that a local beekeeper is unable to help you out, an exterminator will need to remove the bees over a series of visits, returning every few weeks until the hive is fully exterminated. Once the hive has been deactivated, remove any traces of the nest so that the bees and honeycombs will not rot and damage your drywall.

If you can’t find a beekeeper or exterminator to help, wear protective clothing and spray aerosolized pyrethroids into any access points. Do this in the late evening when bees are less active. You will have to repeat the process several times to kill off any unhatched pupa.

Old honey and wax can attract new swarms, so be sure to fill any cracks and holes with foam insulation and check it throughout the year to make sure it's intact.

If bees set up shop in your garden, wait for the winter — when workers die off and new queens have flown away — to safely remove the nest.

How to Prevent a Honey Bee Infestation?

To prevent bees from invading your home or coming back after they’re removed, seal up any exterior holes larger than a pencil, fill wall cavities with expandable foam insulation and remove any traces of honey or beeswax to prevent bees from returning in the spring. You can also repel bees naturally using citronella plants or candles, cucumber peels, or using a basin of sugar water.

If honey bees have overrun your home or garden, fill out the form below and one of Arrow’s dedicated professionals will send these intruders buzzing.