Scorpions are predatory arachnids. They have eight legs and are most easily recognized by a pair of grasping pedipalps, or claws, and a long segmented tail, often carried in a curve over the scorpion’s back, ending with a stinger. Scorpions worldwide can range in size from 0.3 inches to 9 inches in length; however, scorpions found in North America typically range from 1 inch to 6 inches. Visit our scorpion control and extermination page for information about Arrow’s scorpion control services. 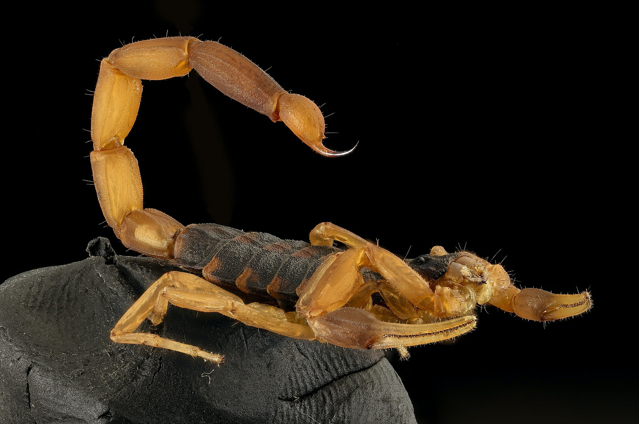 Please note that the above chart data applies to those scorpions found in North America.

Are scorpions arachnids or insects?

Scorpions are arachnids. While scorpions do share several characteristics with insects, scorpions are animals in the order Scorpiones, under the class Arachnida. This makes them a distant cousin of spiders. Like spiders, scorpions have eight legs, two body segments, do not possess antennae, and never develop wings.

All scorpions contain venom in their stingers; however, the sting of most scorpions is comparable to that of a bee sting. Very few scorpions in North America are venomous enough to kill or even seriously harm a human. Additionally, scorpions are not aggressive. They prefer to keep themselves hidden away, and most scorpion stings occur when humans step on a scorpion or reach into an area where a scorpion is hiding.

Can a scorpion kill a small pet or child?

Most scorpions in the U.S. are not lethal to children or small pets. Like adults, children, dogs, and cats typically won’t be able to tell the difference between the sting of a scorpion and the sting of a bee. Children and pets usually recover within 24 hours after getting stung by a scorpion; however, there is one exception. The bark scorpion, found in and around Arizona, can be deadly to children and pets. Therefore, it’s vital to monitor children and pets for difficulty breathing or other symptoms of physical distress beyond minor pain and swelling and take them to a doctor or veterinarian if you suspect they’ve been stung by a scorpion.

Scorpions are primarily nocturnal creatures and are most active at night. They typically spend the daytime hiding under rocks and in dark crevices, coming out to hunt in the safety of darkness, though they can be seen during the day in cool and moist areas like caves and basements.

Where do scorpions live?

There are about 90 species of scorpions typically found in the U.S. Most of these species naturally occur in hotter and dryer states like Arizona, California, New Mexico, and Texas, but there are also several species commonly found in more humid southern states like Mississippi, Tennessee, and Georgia.

While most scorpions prefer to hide in pre-existing crevices found in rocks and logs, some prefer to dig their own burrows or hide up high on vertical surfaces.

What attracts scorpions into my house?

Scorpions frequently find their way inside our homes while searching for shelter, food, and water. Scorpions often seek refuge under and within cracks and crevices in and around homes and other structures. Scorpions can make their way into your home via vents, gaps in doors and windows, gaps around pipes and wires coming into the house, and potted plants or boxes stored in moist conditions.

If you see scorpions in your home, call a professional exterminator. They can identify what may be attracting scorpions, where they may be entering your home, and provide recommendations for ridding your home of scorpions and preventing them from returning.

What do scorpions eat?

Scorpions eat all types of insects, spiders, centipedes, and even other scorpions. Larger scorpions may also consume smaller lizards, snakes, and mice. Scorpions are predatory arachnids, ambushing their prey, capturing their meal with their pedipalps, and paralyzing the creature with venom from their stinger. Once their prey is immobile, the scorpion uses an acid spray to dissolves the creature’s tissues, allowing the scorpion to consume its prey more easily.

If you’ve spotted scorpions on your property or inside your home, get help from the professionals at Arrow Exterminators using the form below.