Subterranean termites live in underground colonies or in moist, secluded areas above ground that can contain up to two million members.

The appearance of subterranean termites depends on their caste within the colony. Worker termites are cream-colored and 1/8 to 3/8 inches long, while the soldier termites have powerful mandibles, brown heads, and cream-colored bodies, as pictured below. Rounding out the caste system are larger, reproductive termites that look like winged ants and are approximately an inch long. Reproductive subterranean termites can often be distinguished from drywood termites by the single, dark vein that runs through their wings. 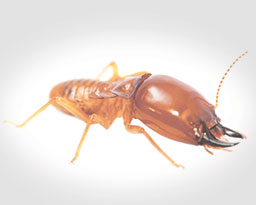 Subterranean termites live underground and build mud-tube tunnels to reach food sources. Like other termite species, they feed on wood and other products containing cellulose. Swarming in the spring, groups of the winged, reproductive subterranean termites will fly off to start new colonies.

Subterranean termites need contact with the soil to survive and thrive underground, which is why they build their distinctive "mud tubes" (sometimes called “termite tubes”) to gain access to food sources and to protect their colonies from the open air. These industrious termites can even build tunnels through cracks in the concrete.

Causing over $2 billion in damages every year, subterranean termites are by far the most destructive species of termite — responsible for 95 percent of all termite damage in North America. Capable of collapsing entire buildings, subterranean termites can mean financial ruin for homeowners and businesses. The hard, saw-toothed jaws of these termites work like shears to bite off small fragments of wood, one piece at a time.

How to Prevent Termite Infestations

There are steps you can take to prevent a termite infestation, including:

Signs of a Subterranean Termite Infestation

Because these pests can cause enormous amounts of damage in a short amount of time, it is important to keep an eye out for the signs of an infestation. Subterranean termites can be detected by their cardboard-like excrement called “carton,” which is used to line their mud tubes.

Though voracious, picky subterranean termites feed with the grain of the wood, eating only softwood. Look for their signature tunnels along the wood grain, with only layers of damaged hardwood left behind.

Signs of a later-stage infestation include airborne, subterranean termites that resemble flying ants, but have straight antennae and four wings that are all the same size. After mating, these swarmers shed their wings, leaving behind evidence of their activity. Look for wings near baseboards and around the perimeter of your home to identify if you may have a colony.

If you do spot signs of an infestation, contact us using the form below for a complete termite inspection.